Welcome to my stop on the blog tour for Reprobation by Catherine Fearns.

Reprobation was published on 16th October 2018 by Crooked Cat Books.

Are you one of the elect?

Dr. Helen Hope is a lecturer in eschatology – the study of death, judgement, and the destiny of humankind. She is also a Calvinist nun, her life devoted to atoning for a secret crime.

When a body is found crucified on a Liverpool beach, she forms an unlikely alliance with suspect Mikko Kristensen, lead guitarist in death metal band Total Depravity. Together, they go on the trail of a rogue geneticist who they believe holds the key – not just to the murder, but to something much darker.

Also on the trail is cynical Scouse detective Darren Swift. In his first murder case, he must confront his own lack of faith as a series of horrific crimes drag the city of two cathedrals to the gates of hell.

Today, I have an extract to share with you kindly given to me by the publisher – hope you enjoy!

In this scene Deaconess Margaret Mills, figurehead of the Sisters of Grace, subjects the congregation of St Michael’s Church to one of her threatening sermons. Sister Helen’s feelings about the Deaconess are beginning to change, and at the end of the service she tells her first lie.

‘All of us are sinners. All people are conceived in sin and are born children of wrath, unfit for any saving good. Inclined to evil! Dead in their sins! Slaves to sin! Without the grace of the regenerating Holy Spirit they are neither willing nor able to return to God, to reform their distorted nature, or even to dispose themselves to such reform. I say again, All of Us Are Sinners!’

This last sentence was said with such venom and volume that several members of the congregation who were sitting in the front pews visibly recoiled. Deaconness Margaret Mills always began her Wednesday evening sermons from the pulpit, in a gentle voice tinged with a hint of menace. She would build gradually, moving from the pulpit to the floor, a crescendo of portentous threats as her whole body would come into play.

She was a natural performer, with eyes widening and narrowing at just the right moments, catching individuals so that they wanted to look away in shame but couldn’t. Her voice would range from ominous low to shrieking high, the gentle Northern accent sounding impossibly grand in this part of the world. There was no comfort to be had from her sermons, only the fear of god struck into one’s heart, and this was the appeal. For the residents, for the visitors, for Helen. Most of the congregation loved the firebrand thrill of the performance, the horror-film quality of the fear. But for Helen the fear was real, visceral. She craved this punishment, this constant, caustic reminder of her sin. After some more fire and brimstone, the Deaconness softened and brought kindness, a sweet manipulation for her audience.

‘Yes, all of us are sinners. And nothing brings the beauty of Jesus Christ to sinful people, believers and unbelievers alike, as powerfully as God’s own Scriptures. The Scriptures are the basis of our teaching, of our Gospel, for the word of God is the only word. And we do not question the word of God. From this comes our happiness’.

She smiled for a moment then suddenly, spectacularly, turned up the anger again.

‘And to those who complain about this grace of an undeserved election and about the severity of a just reprobation, we reply with the words of the apostle ‘Who are you, O man, to talk back to God?’

Hey eyes were wild now and ranged from one person to the next in fury. St. Michael’s Church was small, more of a chapel than a church, having been built originally to serve only the Argarmeols family and their employees. There was no division between the nave and chancery, and no room for aisles flanking the nave at its edges. Therefore there was no escaping the Deaconness’s wrath as she stalked the pews, allowing herself to be an eager vessel for the bitter rage of the Calvinist God.  The majesty of this church interior lay in its absurd height; in typical Victorian Gothic style it had been built to aspire to the sky, drawing the eye upwards and reminding the worshipper how very far above him his God was to be found.

She sighed with theatrical exhaustion, closing her eyes and raising her hands in supplication, before wringing them and returning to the pulpit. She was disappointed with her flock, this rabble of hopeless candidates for heaven. She looked from one face to the next, expectant. The Deaconness taught religious education part-time in a local private school, and Helen, sitting in her usual position on the front pew, sometimes amused herself at the thought of the terror she must instil in those teenagers.

‘May God’s son Jesus Christ, who sits at the right hand of God and gives gifts to humanity, sanctify us in the truth, lead to the truth those who err, silence the mouths of those who lay false accusations against sound teaching, and equip faithful ministers of God’s Word with a spirit of wisdom and discretion, that all they say may be to the glory of God and the building up of their hearers. Amen’.

At the end of the service, Helen waited as the small congregation filed out in a silent purge, wrapping their coats against the cold autumn evening, Helen approached Margaret who was collecting her papers together at the altar.

Margaret spun around. ‘Yes, tell me.’

‘Would it be ok if I took the car overnight tonight?’

Margaret’s eyes and body language betrayed a momentary flicker of disappointment – she had been hoping Helen might ask something else.

‘I thought I might go and see my mother.’

‘Are you sure that’s a good idea Helen? You’ve tried very hard, but it only seems to upset you every time. Has something happened?’

‘No, no, I… just think it’s important to keep showing I’m there for her, you know.’

‘Of course.’ There were those hands on Helen’s shoulders again. ‘Drive safely and come and see me tomorrow when you return, let me know how it went.’

‘I will Margaret, thank you. And may I take some money from the kitty? I think we need petrol.’ 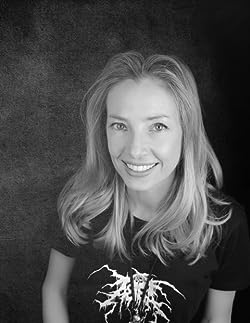 Catherine Fearns is a writer from Liverpool, UK. Her music journalism has appeared in Pure Grain Audio, Broken Amp and Noisey, and her short fiction and non-fiction in Offshoots, Toasted Cheese, Succubus and Metal Music Studies.

She has a degree in History from Oxford University and a Masters from the London School of Economics.

Catherine began her career as a financial analyst, but after having four children she retrained as a breastfeeding counsellor. She is obsessed with heavy metal, and tries to combine it with writing as much as possible.