Welcome to my stop on the blog tour for When I Lost You by Merilyn Davies. 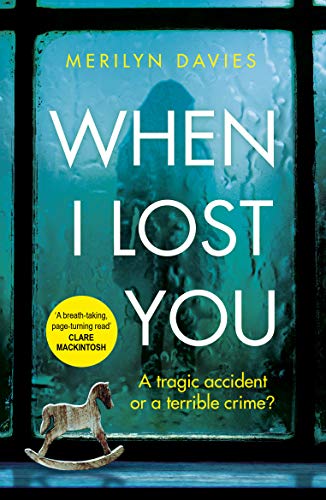 When a young couple are the lead suspects for the murder of their only child, Crime Analyst Carla Brown and DS Nell Jackson are assigned to investigate.

The evidence seems conclusive, but something just doesn’t feel right.

The case is quickly cast into doubt when the lead forensic pathologist starts receiving threatening letters – containing details only the police should know.

Who’s sending them? What do they want? And how did they get hold of the information?

As Carla and Nell dig deeper, it soon becomes clear that this case isn’t the first of its kind.

They must stop at nothing to find the truth – even if it hits close to home.

Thank you to Rachel Kennedy and the publisher for issuing me with my copy of the book and for inviting me on the blog tour.

When I Lost You is the first in a new fresh series featuring a civilian Crime Analyst Carla Brown and DS Nell Jackson – the added bonus of this is that the author, Merilyn Davies was also a former Crime Analyst so I was interested to read this straight away!

We follow an almost routine investigation regarding the death of a baby which are led to believe it Sudden Infant Death Syndrome but something just doesn’t sit right with the pathologist on the case and straight away we are pulled into the investigation which also includes similar cases – are they linked?

I really enjoyed how the author also provided us with another storyline to become embroiled in as we follow the stories and loves of two young girls in care over thirty years ago. You know that this is going to be linked to the current storyline line but how? How the author links these stories and completely contrasting characters is brilliant. I really enjoyed this aspect of the story although found it quite upsetting the more we learnt about the girls and how different their lives turned out.

As I have mentioned, the author was a Crime Analyst herself and I really found it fascinating to read about this aspect of the investigation. As they are not actually a member of the Police Force, they have different responsibilities and maybe not quite as much authority but are still just as integral in investigations.

Considering this is a debut book from Merilyn Davies, I absolutely devoured this as I couldn’t quite figure out how things would turn out. I’m really looking forward to reading more as I think this partnership has a lot more to give!

Merilyn Davies is a former Crime Analyst with the Metropolitan Police who worked as part of the violent and hate crime unit for eight years. She was inspired to write about strong women working in the police force thanks to the incredible women she encountered on the force, and was fascinated to explore the relationship between civilians working in the force and police officers, drawing on her own experiences being married to a serving MET officer.

Her debut novel When I Lost You is set in her home city of Oxford, showing a much darker, grittier side to this idyllic tourist town. She studied Sociology at university and is fascinated with the manner in which society leads people down criminal paths.

She was co-founder of the Chipping Norton Literary Festival and now works for Oxford City Council.